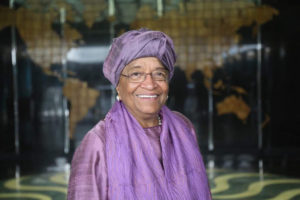 President Sirleaf served as the president of Liberia from 2006 to 2018, becoming the first elected female head of state in Africa. She said of Emerging Public Leaders, “I am delighted to join an organization at the forefront of professionalizing Africa’s civil service. I know firsthand how critical a strong civil service is for any country hoping to drive towards good governance and democracy, deliver quality services to its people, and spur economic and inclusive growth – especially for women – and look forward to helping Emerging Public Leaders expand its partnerships and footprint across Africa to achieve that mission.”

Emerging Public Leaders expands and adapts the model of the President’s Young Professional Program in Liberia, which receives operational and advisory support from GDI. During the past decade, this program has recruited and supported over 140 public service fellows in Liberia; the vast majority of whom continue to work as professionals in Liberia’s civil service. With Liberia’s success and innovation, Emerging Public Leaders has recently expanded its public service fellowship to Ghana and intends to grow a pan-African network of 500 public sector leaders by 2022. President Sirleaf will play a crucial role in the program’s efforts to professionalize leadership in Africa’s civil service, encouraging other partners and governments to join the effort as the organization continues to expand to other African countries.