The Emerging Public Leaders (EPL), incubated by GDI, seeks to build a pan-African network of 500 young leaders in public service by 2021. Drawing on the model proven successful with the President’s Young Professionals Program of Liberia, the team hopes to create a tipping point for meritocratic and effective civil service throughout the continent. The EPL Leadership Team recently returned from a trip to Liberia, Ghana, Côte d’Ivoire and Guinea, which confirmed the need and opportunity in each country for the EPL model of civil service leadership. They also explored existing organizational frameworks and new avenues for collaboration with the respective governments and partnering organizations, in order to achieve EPL’s vision of building a pan-African network of 500+ next generation civil service leaders.

In Liberia, we met with H.E. President Ellen Johnson Sirleaf and the Director General of the Cabinet who both reiterated the commitment of the Government of Liberia to President’s Young Professionals Program (PYPP), which is EPL’s flagship program. We expect President Sirleaf to sign a Memorandum of Understanding in the coming days that will ensure the continuity of the Program beyond her tenure as the President.

Meanwhile, the programmatic elements of the PYPP remain on track. Our trip coincided with the final stages of selection of Class VII. We had a record number of applications as the program further establishes its reputation in Liberia. We also remain committed to building the network of PYPP alumni, most of whom now occupy key positions in a variety of ministries and agencies. 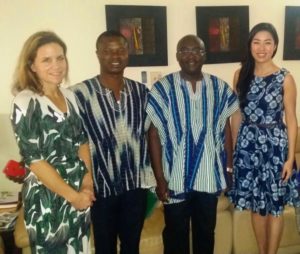 The Ghana phase of our trip included meetings with key members of the new government, including Vice President Mahamudu Bawumia. The Vice President has offered to introduce us to the Minister of Finance to help secure the buy-in of President Nana Akufo-Addo. Furthermore, the Ministry of Youth has expressed solid interest in partnering with EPL. We are planning to hold a joint workshop in March to strategize on EPL’s implementation in Ghana.

There are a number of youth empowerment programs in Ghana run by both the Government and private organizations but none is specifically designed to build capacity in its civil service. We, therefore, see a vacuum that EPL can fill especially as the new administration seeks to fulfill its mandate of promoting good governance. 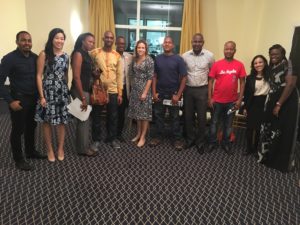 In Guinea, President Alpha Conde has signed a Letter of Intent with EPL, affirming the Government of Guinea’s intention to collaborate with the organization to launch the program in Guinea. We also met with the Prime Minister, Mamady Youla, who was very interested in championing the program, and we discussed the next steps for EPL’s country program implementation. Other meetings included key development partners and stakeholders, all of which confirmed the need and opportunity for this work.  We are planning another trip to Conakry in March to continue outreach with the goal of launching EPL in Guinea in Q3 of 2017.

President Ouattara of Côte d’Ivoire has requested his Minister of Youth and Sports, Minister Sidi Tiémoko Touré, to visit EPL’s flagship program in Liberia. We hope to facilitate this meeting as soon as possible. Also in Côte d’Ivoire, we visited the headquarters of the African Development Bank where we met with the Vice President of Human Capacity Development, Sunita Pitamber. She confirmed that President of the Bank, Akinwumi Adesina, had received President Sirleaf’s letter of introduction and support to EPL’s regional expansion as well as Mr Adesina’s interest in EPL.

Get the latest GDI news