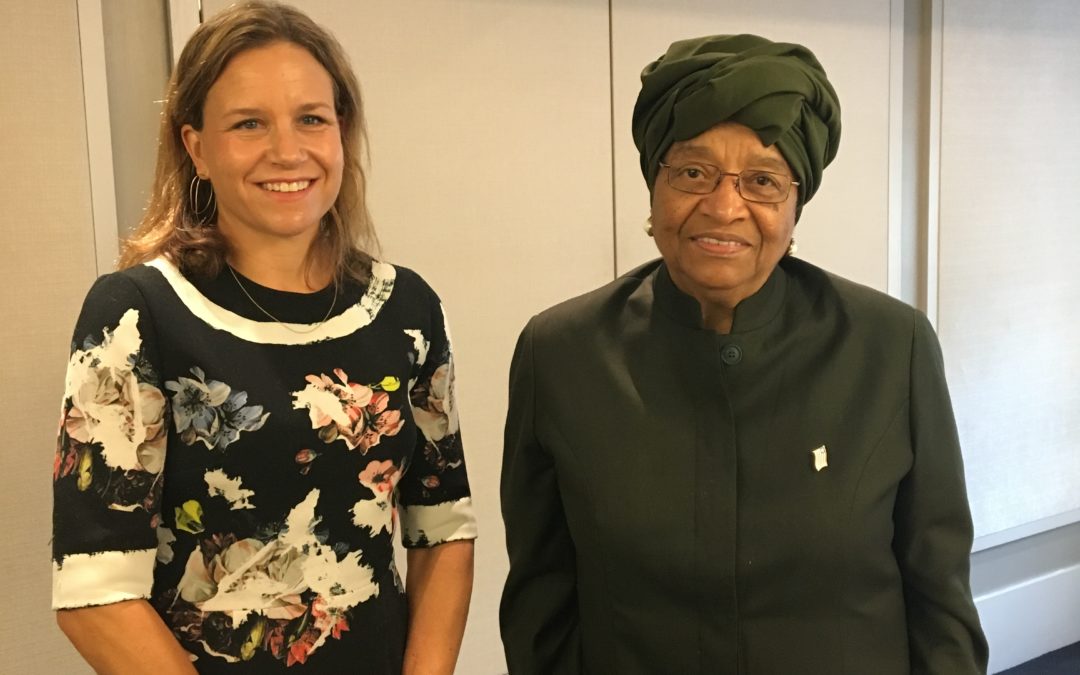 GDI is pleased to share that Elizabeth (Betsy) Williams received National Honors from H.E. President Ellen Johnson Sirleaf during Liberia’s Independence Day celebrations today. Betsy has worked closely with GDI for several years in her roles as  the co-founder of the President’s Young Professionals Program of Liberia (PYPP), and the founder and executive director of Emerging Public Leaders. View a full news release by clicking “read more.”

Monrovia, Liberia – July 25, 2017 – H.E. Madam President Ellen Johnson Sirleaf conferred National Honors on Elizabeth (Betsy) Williams today for her contributions to Liberia’s development, particularly through her dedication to building the next generation of civil service leaders in Liberia and striving to improve the country’s health systems. Ms. Williams was awarded Dame Officer, Most Venerable Order of the Pioneer.

Ms. Williams has worked closely with President Sirleaf over the past 10 years. Their collaboration began when Ms. Williams managed the Scott Family Fellows Program and supported the Liberian Ministry of Health. In 2009, Ms. Williams and President Sirleaf launched the President’s Young Professionals Program (PYPP) of Liberia upon seeing the country’s urgent need for a stronger civil service following two civil wars, and recognizing the potential of the nation’s youth to drive that progress. Over the last eight years, PYPP has recruited and placed 120 young leaders into the Liberia’s public service, along with providing them with the mentorship and training needed to be successful.

PYPP Executive Director Hh Zaizay noted that Ms. Williams’ support has been essential not just for launching the program in Liberia, but for moving the country towards a tipping point for meritocratic and effective civil service – something critical for a country in desperate need of a strong government but rising from a legacy of government mistrust. He commented, “Betsy has worked tirelessly to empower our country’s young people as agents of change. Ultimately her work has allowed us to continue on our path of success towards building a new generation of civil service leaders in Liberia that will guide our country on a path to prosperity.” Ms. William currently serves as PYPP International Advisory Board Chair and as a member of the PYPP Liberia Board of Directors.

Ms. Williams also founded and serves as Executive Director of Emerging Public Leaders, which seeks to expand PYPP’s successful model and build a pan-African network of 500 young leaders in public service by 2021 – starting with plans to launch in Ghana and Guinea later this year.  President Sirleaf is one of Emerging Public Leaders’ strongest supporters and has helped champion its expansion, having seen the impact of investing in young people in Liberia.

These National Honors mark the last that President Sirleaf’s 12-year administration will bestow, as she will transition from power following Liberia’s presidential election in October 2017.