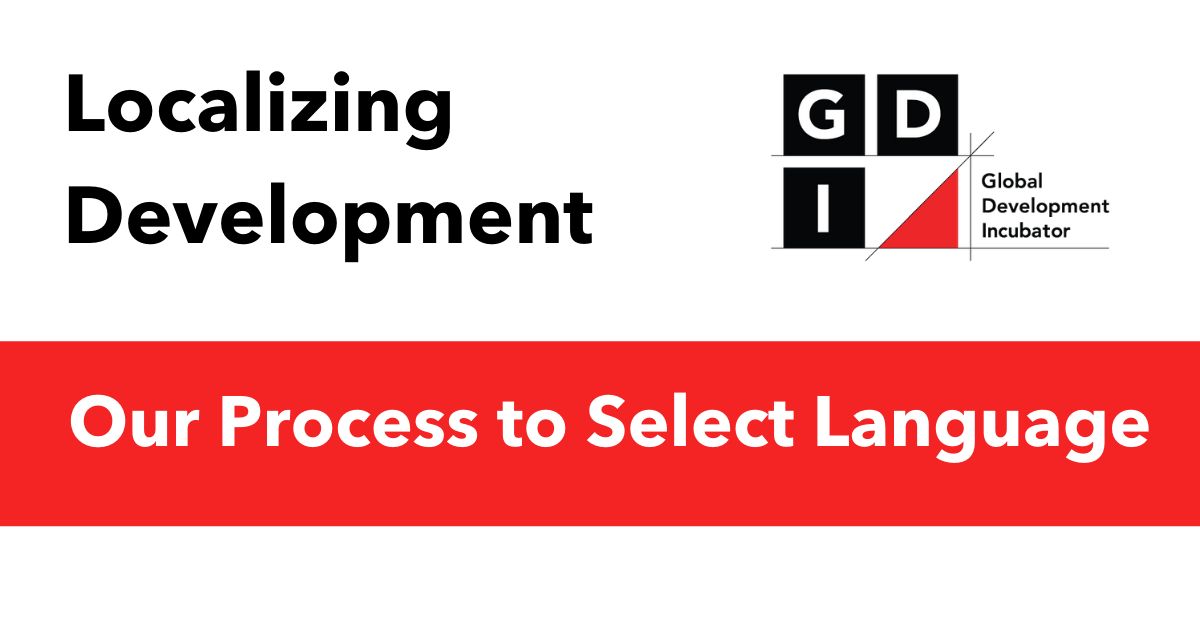 This post is part of a series of articles where we will explore the landscape, challenges, and potential solutions to support localizing development. We will also be exploring bright spots, and creative ways our colleagues are moving development and international relief closer to the communities they impact.

This article and series were developed through consultative conversations with our global team at GDI and cross-sector experts representing diverse perspectives around the world. We reviewed more than 50 articles and opinion pieces, and over 20 long-form reports. We spoke with 25 individuals at non-profits, networks, foundations, activist organizations, and social businesses, all of whom engage deeply with this topic in their work. We are deeply grateful for their time and insights.

As GDI began our journey to consider how we could contribute to decolonizing and localizing development, we were immediately faced with several questions:

While we knew there were many perspectives about how this language should be used, we were surprised to discover that even inside GDI there were differing, strongly held understandings on what terms meant, and which terms were most appropriate and respectful. We needed common ways of understanding the language and talking about this work, both internally and externally.

In this series, we will largely use “localizing development” based on the research, discussions, and clarifications outlined below. We will share our thinking and process for transparency on why we use certain terms, and what they mean to us at GDI.

At the same time, we will continue to learn and grow as an organization. If we discover that new terms or refinement of these definitions are better for our work and the community, we will reconsider and update the language we use. To that end, as always we welcome feedback, questions, or suggestions to help us strengthen and refine our process and thinking.

Over time we began to realize that we were unable to reach consensus because decolonizing development and localizing development are not precisely equivalent. We had difficulty coming to a shared agreement because individuals were describing different concepts. Both terms had an important role to play, but we needed to clearly differentiate between them.

Our Definition of “Decolonizing Development”

“Decolonizing” has been embraced by many as a metaphor, in some cases without a tangible definition. We knew, if we wanted to understand the landscape and assess where we could contribute, we needed to start with a specific description of what “decolonizing development” means so we could ensure we were discussing the same principles.

The focus of decolonizing development is to address systemic bias, with the final outcome goal of reimagining the entire development and humanitarian aid sectors and replacing them with more equitable and just alternatives.

To us, decolonizing development meant:

Proactively empowering and returning agency to communities that have historically been disenfranchised due to racism, colonialism, exploitative practices, and other systematic injustice, particularly in the context of international development and humanitarian aid.

Our Definition of “Localizing Development”

Localizing development, and the way it was used in conversation, consistently appeared to have a more narrow meaning. Localization looks more like directly funding “local” organizations, engaging community stakeholders in program design, and allowing affected communities to help set and manage their own priorities.

To us, localizing development meant:

Transforming unbalanced privilege structures to empower actors in the international development and humanitarian aid ecosystem with influence that is proportional to the impact of development and aid activities on their individual lives and communities.

With this approach, we view localization as supporting a broader decolonizing development agenda. Localization has the potential to catalyze or demonstrate progress toward a broader decolonization goal, but is inadequate in itself to fully achieve an ideal decolonized state. GDI’s initial focus in our own work will be on transitioning funding and power to domestically registered colleagues.  To represent this our work and writing will generally use the term “localizing development”.

Our Process to Develop the Language We Use

From there, we started a discussion of the terminology we wanted to use in our own work in this area. As Sarika Bansal shared:

“Language matters. The words we use shape the stories we construct of people and places, and ultimately, the policies and decisions we make.”

In our background research we found many articles that were focused on what terminology shouldn’t be used, but far fewer that identified respectful and appropriate language that should be used. This was further complicated because virtually every term that was widely used – from global south, to developing nations, to lower-middle-income countries (LMICs) – had vocal supporters and detractors. Even inside GDI’s global team, across East Africa, East Asia, and the United States, we had individuals with strong opposing opinions on what language was best and no immediately clear consensus.

So we began a process to consider how we would select, refine, and use language.  While this process was specific to our decolonizing and localizing development exploration, we quickly discovered the principles applied across much of our work, as you’ll see in some of the examples provided.

Our Principles for Selecting Language: Practical, accurate, and respectful

We began by developing clear parameters. Any language we used needed to be:

1. Practical: We need concise, easily understood terms that allow us to quickly share an idea. Imperfect terminology that is broadly accepted is preferable to longer, more confusing explanations.

2. Accurate: We hold ourselves accountable to find terminology that best matches the situation at hand. For example, an economic migrant and refugee are not the same; they do not have the same primary motivations and are not afforded the same legal status or protections. It is important that the language we select corresponds with the actual situation.

3. Respectful: We want to identify language that is respectful, or at a minimum neutral, for all parties. Our colleagues quickly identified a few areas where they had intentionally updated their language:

Specific to our decolonizing and localizing development work we always included one key question:

Would the same language work if you used it in both a global north and global south context?

And at the same time, we accepted that we might select language that not everyone preferred. We held ourselves to a standard of thoughtful, respectful, and reasonable language, but we knew we would not be successful if we held ourselves to a standard of universal acceptance. That didn’t absolve us of the responsibility to understand and consider the viewpoints of others, but practically we needed to select the initial language to move forward.

We recognize that any language that groups together large swaths of culturally, racially, and ethnically diverse countries will be by definition imperfect. Nonetheless, our work requires clear and concise ways of exploring both economic disparity, and differences in the experience of individuals from historically “colonizing” nations, compared to those from historically “colonized” nations. We’ve adopted two sets of terms to describe these differences.

Next we set out to consider whether we wanted to continue to use the term “local organization” to describe organizations that are led and registered in an LMIC. “Local organization” had the advantage of being widely understood and adopted, and very few practical alternatives had gained much traction.

But that term didn’t pass the test of whether the same language would work if used in both a global north and global south context. A local organization in the global north implies that its work is limited to a narrow geographic area such as a neighborhood, community, or city. Did using the term “local” in this context inappropriately imply that all NGOs registered in the global south were, or needed to be, small, or geographically constrained?

We decided to transition to the term “domestically registered in an LMIC” or simply “domestically registered” when the surrounding sentence provided ample context to indicate it implied location in a global south country. Our initial use of this language confirmed our assumption that this terminology was easy to understand and easy to use. Each time we used it in conversation it was successfully understood by the other party what we meant, so we’ve transitioned over to this lexicon.

One thing nearly everyone seems to agree on is that not all domestically registered organizations are the same when it comes to representation of and connections to the communities they engage. A locally registered affiliate of a large US-based organization that is not permitted to operate independently from “headquarter” guidance is significantly different from an organization that was envisioned, started, led, and staffed by individuals from the served communities. And a host of organizations operate somewhere along the spectrum of this continuum.

The key hallmark of a truly domestically led and registered organization is that it has the authority to design its own strategy, programs, and operations, and fundraise for them without review or authorization from an organization in the global north.

Indicators that might point to whether an organization is locally led (or not) along this continuum could include:

There are so many opportunities for progress, and as we start our journey we want to be inclusive of as many organizations as possible that are actively striving to independently serve and represent the communities in which they work.

We know there are many other instances where we may still need to consider the language we use, and we are continuing an internal process to refine our work in this area.

This journey mirrors the GDI ethos of continuous learning and development of our thinking.  We approach this journey with a learning and listening-centric approach, and invite you to join us in this dialogue. That may look like considering how you use your own language, sharing your perspective with us, or discussing these issues with your colleagues.

No matter what that path looks like for you, we look forward to learning, becoming better, and advancing this important work together.

Join our mailing list for updates and follow this series for our latest thinking on the language we use related to GDI’s work in this area. You can also read the first article in our series here.